Working as an archivist, I spend most of my days secluded in a windowless, cold brick building working with materials that speak volumes but rarely say a word. I love my work dearly, but when given the chance to step out of this (Hollinger) box…I jump at it. This is why I always say yes when the lovely ladies of White Rose Collective ask me to moonlight as “model” for a day.

The love-child of Andrea Donoghue and Teddi Cranford, White Rose Collective is comprised of professional stylists and make up artists who bring high-fashion concepts to those of us who spend more time walking office hallways than we do runways. In addition to wedding prep, Andrea and Teddi leave their Manhattan-base to offer educational seminars hosted by salons in various U.S. cities.

After “modelling” for them last year, Andrea asked for my assistance on March 30th at Borrow Salon in San Francisco; I was only too happy to oblige. I emerged from the prior gig at Edo Salon sporting a sultry Dolce and Gabbana-inspired up-do, so I was giddy to see what the WRC team had in store for me that sunny Sunday.  I was assigned to a wonderful stylist by the name of Julio Hernandez, an Aveda master stylist who hails from Southern California and has been in the biz for over 12 years. This handsome gent was a delight, and before I knew it my hair was whipped into a soft multi-extension dream.

While my normal photographer had a scheduling conflict and couldn’t accompany me (damn you, band practice!!), the fellows at Glass Coat Photo Booth were kind enough to let me the use images you see from a booth they installed in the salon for the day. The whole day was a hoot, and I highly suggest you consider this Collective for your next event or even just to treat yo self.

Many moons ago (October 2013), I attended a Father John Misty show at Slim’s and a very nice lady by the name of Teddi Cranford asked me a question: “Would you want to be a hair model this weekend?” Once I heard the words “haircut” and “products” modified by the word “free”, I of course said yes. The name of the game that day was education, and the lovely staff at Edo Salon were learning looks fresh off the Dolce & Gabbana runway from  Teddi and her White Rose Collective partner, Andrea Donoghue.

My intention at the time was to write a piece about the Collective event, but it never materialized for one reason or another; there are only so many hours in a day, and I’m still somewhat uncomfortable with the whole PR angle of this online branding schtick. I dragged my Fella along for the ride and the free food, and he took a slew of photos–a few of which I’m sharing with you now. Enjoy. 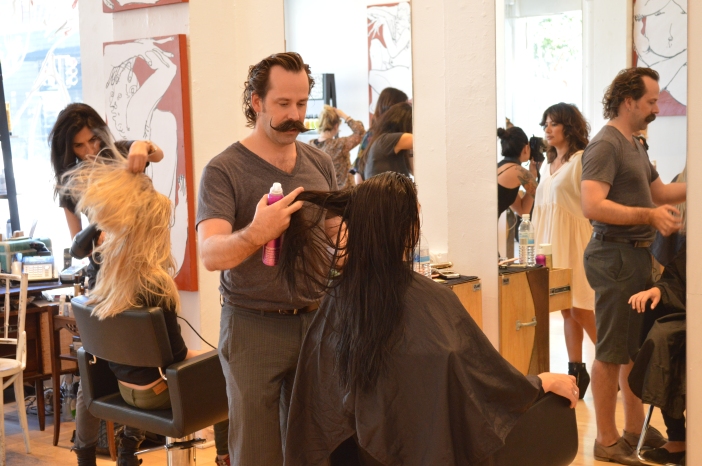 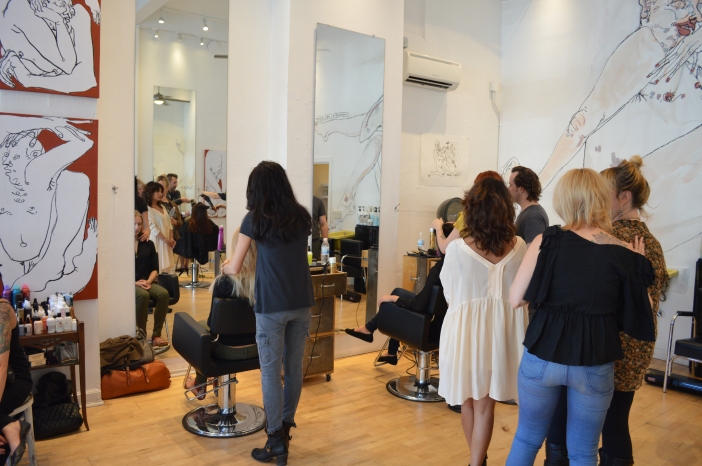 Part of the reason I nerd out on history is my fascination with how events repeat themselves, repeatedly. Times change, technology advances, yet we still experience tragedy, comedy and joy in similar ways to that of our forbearers. This means the human condition has remained fundamentally unchanged in the face of societal progress; we have failed to Darwinially adapt. After having experienced the Great Depression, shouldn’t we, as a nation, be able to bear the recent Recession with more grace and shouldn’t our political directors be able to maneuver the solution more deftly?

Granted, our globalized-digitized economies cannot be treated the same as that of the 1930s. Also, the New Deal would never have been so successful had it not been for the gargantuan influx of capital generated by World War II. Aside from these realistic differences, there is always something to be learned from the past such as FDR’s outside-the-box approach of taking a committed capitalistic country down a socialistic path of welfare programs like Social Security. So Social Security is in a bit of hot water these days, what with its looming financial ruin, but the noose of these troubles cannot be hung around the neck of its creators; it should, instead, be strung around the men and women who were supposedly minding the shop for the last seven or so decades. If only the powers that be had the forethought to keep a log of decisions for reference, like a congressional record or something. Wait a minute…

The thing about modern civilizations is that they are obsessed with logging their own history. Actually, that is what it means to be civilized and this impulse is why we have the Declaration of Independence (pro), but also why we have A Shore Thing by Nicole “Snooki” Polizzi (con). While Snooki’s elevated presence in our society is regrettable, it is a reality and thusly deserves to be chronicled if for no other reason than to have a record to prevent future Snookis. Thanks to the press we have an ever expanding archive of our national history that is supplemented by diaries that emerge from attics generations later to be published as disseminated works of non-fiction, by novels, by plays, and so on. I’m partial to diaries due to their authenticity, but newspaper editorials—that is, articles published from the point of view of the author and not strictly adhering to the factual—are equally as enlightening. Take this 1877 piece titled “Queer Fancies In Hard Times” originally published in the aftermath of the Panic of 1873 and during the Great Railroad Strike. The sentiments expressed here could also be expressed now, and it reminded me of a recently published book by Emily Matchar titled Homeward Bound: Why Women Are Embracing the New Domesticity.

Meaning, things are different now…but are…also…the same. The prevalence of second-hand shops, women repurposing things they already own instead of buying new clothes, men oblivious to any change in outfits, and the prevalence of jewels made of paste instead of something wrought from the ground that are discussed in this article are very much of the present. Especially for us “middling grade of women.” Enjoy.

“It is generally understood that these are hard times, but, for all that, a great man people spend just as much money as ever they did. Our fashionable restaurants, tailors and barkeepers keep up the old tariff of prices. Fifty cent cigars are still displayed; swell receptions are crushed by bejeweled people the same as ever; but while the rich are very rich and the poor are very poor, there is a great middle class among whom we detect economical eccentricities of the most extraordinary type. Collectors have a hard time of it, and how they manage to keep their patience, and preserve even the semblance of decent intercourse with the people they have to dun day in and day out for money, is something we cannot understand. Cheap clothiers enjoy this sort of thing. You can get sums that a few years ago would barely buy a decent vest, a full suit of clothes; though the tailors say that while their cloth was fabulously cheap, there never was a time when people seemed to be so averse to buying, if they can possibly help it. Second-hand shops seem to suffer terribly. In the first place second-hand shops don’t get the goods. People keep all their old clothes now; just as long as there is any wear in a coat a man wears it. You cannot find a second-hand overcoat on a stand, because everybody is wearing his own. Repairers, menders and cleaners are doing well. The patent cement with which boots are patched has become quite an article of commerce. Men are less particular about how their boots look than they were in other days. The middling grade of women look to the mere masculine eye as beautiful, as charming, and as gorgeously dressed as ever; but the feminine eye detects the weakness. First of all, the girls economize on their bonnets. They fake them. They fix them all over—take an old hat and cover it with feathers. In other days a woman who put on a pair of gloves more than twice or thrice was looked upon as an example of economy, while the woman who patronized a cleaner for her gloves was considered on the way to the home of a miser. Nowadays women have their gloves cleaned two or three times. They trim their dresses, nearly worn out, with other colors; they wear new overskirts; they wear old boots at home instead of fancy slippers; they do not indulge so much in embroidery and silk on their under-linen; they have their washing done at home, or by women whom they pay by the week instead of sending it to the laundries. To be sure it does not look so nice, but it is cheaper. Of course the laundries suffer; but the dyeing establishments are doing better than ever. Fashionable modists are hard up, but cheap dressmakers have more than they can attend to. Who knows but what if these times continue every American girl will be her own milliner, and every honest woman her own dressmaker? Perhaps the jewelers—the high-toned jewelers—suffer more than any other traders. Parisian diamonds and Lake George crystals are really taking the place of genuine stone, among the middles classes, and, to a surprising extent, among ladies whose cheeks would turn to the color of their carbuncles if the truth about their precious stones could be but revealed. On the whole this is a high old age.”